By Oliver SummersMarch 13, 2018Tennis
No Comments

So by now, you may have heard that the Courts Plus Men’s 4.5 team, consisting of myself, Adam Gustad and David Youngs made it to nationals. In the Summer I started the first Men’s 4.5 ONE doubles league where teams of 2-4 players played every other team in the league twice on a weekly basis. We won that league, and then moved on to play against all the other teams in the Northern Section, in Minneapolis. That was in November, and we beat every other team without losing a set to punch our tickets to nationals. There we get to play alongside the Pro’s at the BNP Paribas Open at Indian Wells, CA. You can watch the pros play on ESPN this week, with the likes of Roger Federer, and Serena Williams playing. You won’t see us, unless it’s in the crowd, we’ll be on the outside stadium courts playing for high fives, handshakes and the love of the game. Ok, so maybe a cool trophy is at stake.

Tonight I wanted to highlight my teammates, Adam Gustad and David Youngs and give you a little background on how they got to where they are, and how Courts Plus was instrumental in their tennis journeys.

Both David and Adam both started playing tennis at Courts Plus in our Star tennis academy. They both took private lessons from an early age, and fell in love with the sport. They both played High School Tennis at Fargo South. Check out some early photos of the two Bruins: 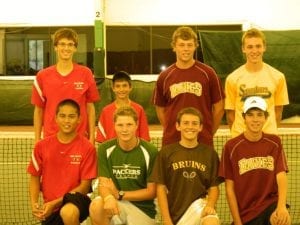 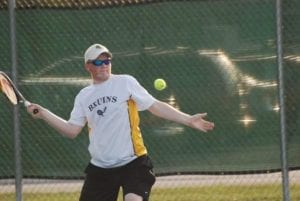 Adam attended NDSU and started playing Club tennis for the Bison. He then transferred and played for Buena Vista, Iowa a Division III tennis school. After graduating Adam continued to play tennis and now plays his tennis out of Minneapolis, participating in multiple leagues and tournaments, as well as coaching high school tennis.

David currently attends Concordia College, where he plays for their Division III tennis program. Actually, because David is currently in his season there, he’s not allowed to attend the USTA Nationals, but he was instrumental in getting the team there. David still takes lessons and also helps coach the Bruins.

So you can see their paths were fairly similar, and they both now have a lifelong love of the sport that they will continue to play, for as long as they can. I almost forgot to mention, as David and Adam got really serious about tennis they both did personal training at Courts Plus, and they both credit this training in getting them in the best shape of their careers.

The good news is that Courts Plus still has the Star tennis academy and we are lucky enough to have many graduates from the program who continue to play tennis in High School, College and beyond. We still have a lot of the same pros, and personal trainers, who helped David and Adam along the way.

Check out all that we have to offer to help you in your tennis career or whatever your chosen sport is. I’ll be blogging while we’re in Indian Wells to keep you posted on how we do, so check back each day this week. Our first match is on Friday.

Nutrition Timing: Does it Matter?